Marc Destrubé has an international career as a performer of baroque and classical music on period instruments, and performs extensively as soloist, chamber musician, concertmaster and director of orchestras on modern instruments, particularly music of the 20th century and new music. He is a member of the Turning Point Ensemble, first violinist with the Axelrod String Quartet (Smithsonian Institution) and co-concertmaster of the Orchestra of the 18th Century (Amsterdam). His teachers included two eminent string quartet leaders, Norbert Brainin (Amadeus Quartet) and Sandor Végh (Végh Quartet). http://marcdestrube.com

“I love being surrounded by people who make music because they enjoy it. I will continue to surround myself with such people”.  After her Vancouver studies Andrea Siradze moved to Germany, where contemporary music was the focal point of her stay, highlighted by commemorative performances that celebrated composers in person, those that are responsible for shaping the direction of music today. She is a member of the Vancouver Opera Orchestra, concertmaster of Lions Gate Sinfonia, and a member of the Microcosmos Quartet. Andrea’s loves are many and include spending time with her family and the wondrous surroundings of the West Coast. Of her future Andrea says, “I’m very happy to be doing everything I’m doing, I wouldn’t change a thing. I’m happy to just play – this is what I want.”

Canadian violist Tawnya Popoff enjoys an exciting and versatile international career.  In addition to being principal violist with the Vancouver Opera (BC), she is a member of the River Oaks Chamber Orchestra (TX), Turning Point Ensemble (BC).

She is passionately devoted to developing and performing music by living composers and has been involved in performing over 100 commissioned works, more than half being by women and underrepresented communities.

Valuing education immensely, she has served on the faculties of the Perlman Music Program, University of Pennsylvania, Syracuse University, SUNY Buffalo, Bowdoin International Music Festival, The Walden School, and Artes no Camiño (Spain), the Vancouver Academy of Music and in her private studio.    She studied with Gerald Stanick (Fine Arts Quartet) Martha Katz (Cleveland Quartet)

Cellist Rebecca Wenham's performances have been described as "silken, highly refined" (the Globe and Mail) as well as having "extraordinary commitment and maturity" (La Gazette). Her animated playing style is often surprising, dramatic and impulsive, leaving a breathless audience on the edge of their seats. She has performed across North America, Mexico, Europe, Japan and Australia. Formerly a member of the Cecilia String Quartet, she won prizes in the Osaka, Rutenberg, Bordeaux and Banff International String Quartet Competitions, and was a CBC Galaxie Rising Star in 2007. Recent highlights include performances of the Elgar Cello Concerto with the Vancouver Philharmonic, the Brahms Double Concerto with the Lion’s Gate Sinfonia, as well as a sold-out solo cello concert of music of the 21st century, presented by Music on Main at the Fox Cabaret. Rebecca was recently named principal cello of the Vancouver Opera Orchestra. She holds degrees from the HARID Conservatory of Music, and from Rice, San Diego State and McGill Universities. 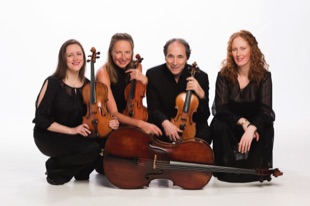